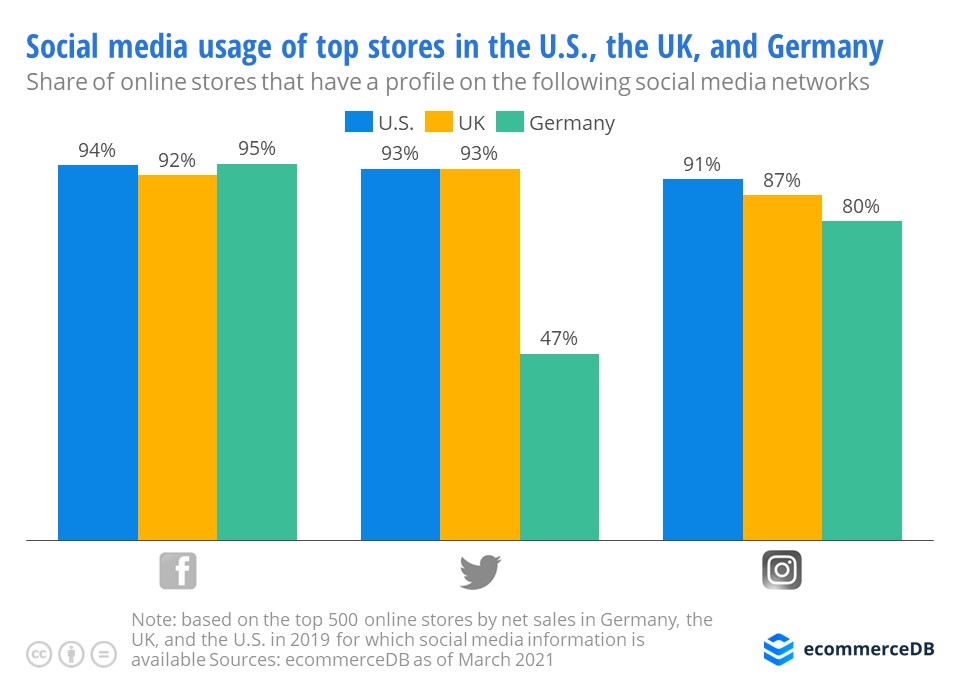 TikTok, Clubhouse, Telegram. These are only three examples of new up-and-coming digital platforms that have taken the world by storm – but social media platforms have long been around and have increased their reach and popularity ever since their invention. According to current estimates, more than half of the world’s population engage in social media today, with no end to the upward trend in sight. Especially for younger generations, social media has become an integral part of their every-day lives. They use the platforms as a pastime, as an information source, as a means to express themselves, to stay in contact with friends or – as part of a fairly new development – to shop. Social commerce is on the rise as retailers have long identified the great potential that social media holds in terms of reaching out to potential clients. ecommerceDB.com has taken a look at the social media platforms Twitter, Facebook and Instagram, and analyzed the top 500 online stores in the U.S., the UK, and Germany in order to find out how many of them engage with the three well-established networks.

When taking a look at the country comparison, it turns out that UK and U.S. online stores have quite similar usage patterns of the three big social media platforms Facebook, Instagram, and Twitter, while Germany steps a little bit out of the line. Out of the top 500 online stores by net sales in the U.S., more than 90% are active each on Facebook, Instagram, and Twitter, with Facebook having the highest usage of 94%. The UK top 500 also engage with all three platforms to a great extent. Twitter and Facebook are used by 93% and 92% of the biggest UK online stores, respectively. Only Instagram is a little off, with a usage slightly below 90%. In Germany, the situation is completely different. While Facebook has the highest usage among German top stores in this comparison – 95% of the top 500 in Germany have a profile on Facebook – the two other platforms are way less popular. Only 80% of the biggest German online stores have an account on Instagram. Twitter is used even less. As few as 47% of the top 500 in Germany are active on the news network.